Five positive developments in the global energy system in 2022

The last five years have seen a tectonic shift in energy. The dominance of fossil fuels has been forever shaken by the rise of renewable energy. The International Energy Association (IEA)—long known for its dismissal of renewables—has finally acknowledged that we are experiencing peak fossil. From here on out, the share of fossil fuels in the global energy system will decrease. It’s just a matter of how quickly.

Things are changing so rapidly that it’s hard to stay up to speed. In addition to the dizzying rate of innovation, bad actors have ramped up their disinformation campaigns. Fossil fuel companies and petrostates can no longer deny the effects of climate change and air pollution, but they are now frantically trying to deny the viability of renewable energy. Just search “renewable energy” on YouTube to get a sense of the misunderstanding and disinformation. However, I think this hasty transition from problems denial to solutions denial is a sign that fossil fuel interests have seen the writing on the wall. Indeed, clean energy is extremely popular and non-partisan. Support for research and deployment of renewable technologies has a super majority in every county in the U.S. 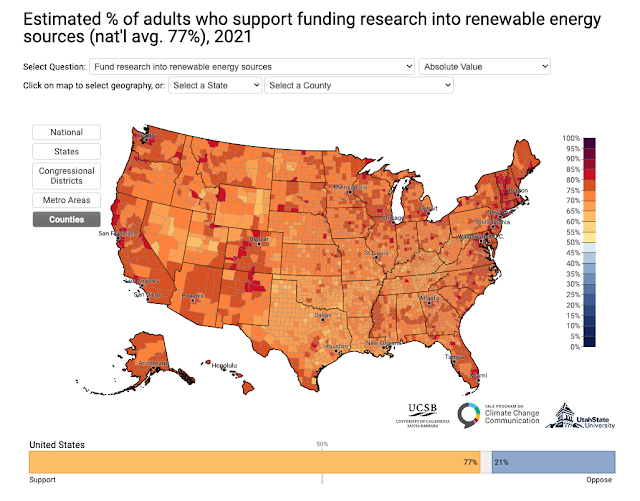 In the midst of this war of words and tumult of opinions, renewable energy has quietly marched forward. While unqualified skeptics claim that renewables are a “failed path,” wind and solar have almost completed their takeover of global energy growth. Last year, renewables constituted just over 90% of all new energy infrastructure, and the IEA projects that 95% of all growth through 2025 will be renewable. We are experiencing an energy transition that is faster and more profound than the Industrial Revolution.

Russia’s invasion of Ukraine has supercharged the transition as more countries decide it’s not cool for a foreign dictator to be able to jack up their energy prices at home. For example, Europe’s early investment in renewables saved them $50 billion in fuel costs alone this summer as fossil fuel prices skyrocketed.

The transition to renewables is also creating stable, high-quality jobs in mining and manufacturing. Our energy workers have long been under-compensated and forced to absorb the economic shocks of OPEC and global oil markets. We are looking at tens of millions of career level jobs in the U.S. and globally.

Last December, we published a renewable energy report for some of Utah’s congressional delegation. We will update the report next month, but I wanted to share some of the most important research and market developments from the past 12 months. Here are five important "take-homes" about the clean energy revolution.

1. The bleeding is no longer getting worse

Two weeks ago, Pierre Friedlingstein and company released the 2022 global carbon budget. This is the most definitive assessment of what is going on with the Earth’s carbon cycle.

The panel on the left shows human carbon emissions and natural carbon sinks. The gray and orange wedges show annual greenhouse gas emissions from fossil fuels and land use. Check out the top of the chart over the past few years. The growth in emissions has stopped! This is thanks to the hard work of billions of everyday citizens, millions of activists and innovators, and thousands of companies and governments around the world.

Before we declare victory, let’s look at the panel on the right. The cumulative amount of greenhouse gases in the atmosphere will keep on climbing until our emissions drop to zero. We are still a long way from that, but with emissions flat, we are poised for a rapid descent. If we keep the pressure on, ten years from now, the emissions figure will look like a boa constrictor that swallowed an elephant.

2. The energy system of tomorrow will be healthy and efficient

Last month, Tansu Galimova and team published an analysis of how the transition to renewable energy would affect air pollution. The short answer was, there won’t be any more of it. They predict a 97% decline in air pollution. 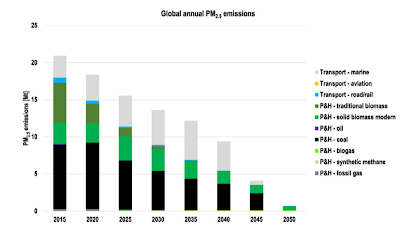 Currently, 99% of the world’s population is breathing unhealthy air, with over 10 million premature deaths from fossil fuel pollution annually. That is more loss of life than all communicable diseases and nutrition deficiencies combined. The health and economic benefits of this transition are hard to fathom, but they surely exceed the operating expenses of the entire global energy system.

Clean energy isn't just good news for the climate. We are all going to be healthier, happier, longer lived, and less afflicted by heart disease, cancer, reproductive disfunction, and neurodegenerative conditions.

3. But how much is this going to cost?

That sounds great, but I’m sure some of you are asking, “can we afford such a dramatic transformation in the energy system?” Rupert Way and team answered this question in a groundbreaking study this year. They tallied up all the expenses of our current fossil-fuel based energy system and compared that to the cost of a global transition to renewable energy. How much is it going to cost? Negative $12 trillion. 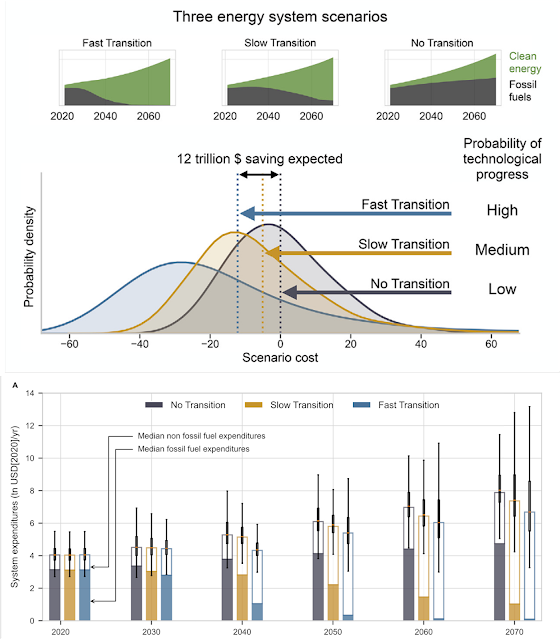 Because renewable energy costs so much less than fossil fuel energy, a rapid transition saves the global economy trillions. Buying the coal, oil, and gas to run the current energy system accounts for 75% of total expenditures. Renewables cost money to install and maintain, but they don't consume any fuel.

These new economics explain why every country in the world is investing so much in renewable energy. Whoever transitions fastest will have an enormous economic advantage.

These savings don't only exist at the macro-economic level. Conservative estimates indicate savings of several thousand dollars per household each year in the U.S.

Just to be clear, Rupert only considered the economic costs of running the energy system. They didn’t include the human health and environmental benefits. If you include those, the savings are closer to $50 trillion through mid-century. I thought this Voltz episode on the paper was well worth a listen.

4. But what about supply chains?

You may be thinking, “That’s great that the energy transition is economically and environmentally beneficial, but given the state of our global supply chains, we won’t be able to transition on schedule.” Two papers have recently come out on this topic.

Lowe and Drummond tested the feasibility of “logistic substitution” of our current energy infrastructure with renewables. They found that there were no physical or raw material showstoppers to this transition. In fact, they projected healthy surpluses of all the critical minerals necessary for the transition and projected major reorganization of energy over the next two decades thanks to the incredible economics of wind and solar. Investment markets have come to the same conclusion, with lithium stocks sharply dropping after investors realized that supply was well ahead of demand.

The second paper is by Christian Breyer and 24 other world-class energy researchers. They found that all the technological and supply chain provisions were already in place for a truly sustainable civilization. They summarized the research on the best economic and human rights policies to ensure a rapid and just transition. 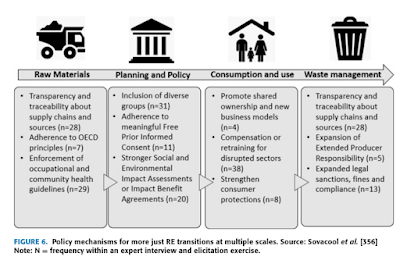 The widespread claims that a large-scale energy transition isn't feasible are either misinformed or misguided.

Dmitrii Bogdanov and a team of global energy researchers published a landmark study last year that used high-resolution energy system models to simulate the global energy system over the next 30 years. There are so many important messages in the paper, but here are two of the coolest IMO.

First, by electrifying everything, we double efficiency. Currently, around 60% of the primary energy we get from fossil fuels is lost as heat. By using wind and solar to create electricity directly, and then using electricity in transportation, heating, manufacturing, and everything else, we will be able to supply reliable and affordable energy to every human on Earth for the same amount of primary energy we use today. Just like my grandpa always said, “there’s enough for everyone, if you don’t waste what God has given you.”

Second, the primary renewable energy source depends on where you are. Most of the world’s population lives in areas where solar can provide more than enough energy. Solar is already the cheapest energy source on earth. Because most energy consumption occurs during the day, the intermittency of solar is easy to manage with transmission and short-term storage.

For areas farther from the equator, wind, hydro, and geothermal come into play. This map shows Dmitrii’s assessment of the least-cost and most-reliable renewable energy solution for every country on Earth. 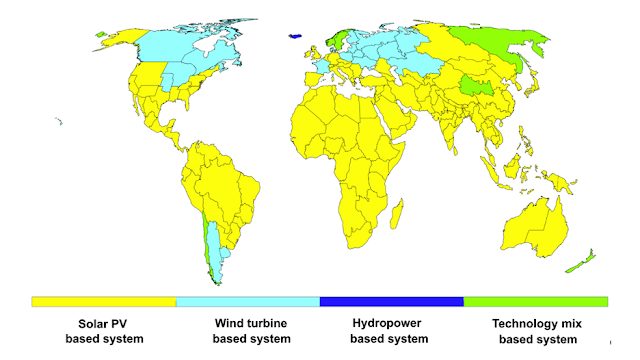 Bonus: But why transition when China isn't doing anything?

This is one of the most common criticisms I hear when discussing energy policy. Besides being a bandwagon fallacy, it is patently false. China has read the tea leaves and is winning the renewable energy race. Indeed, China is deploying more renewable energy than the E.U., U.S., and India combined. 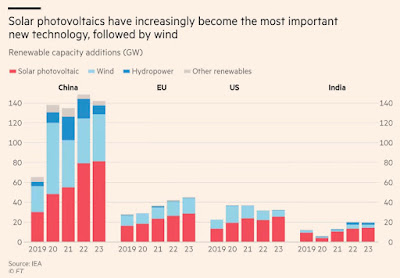 China is also dominating investment in the energy transition, more than doubling the U.S. showing. This is important because the countries who invest in cheap and clean energy now will have a major geopolitical advantage in quality of life, economic prosperity, and ideological competition. 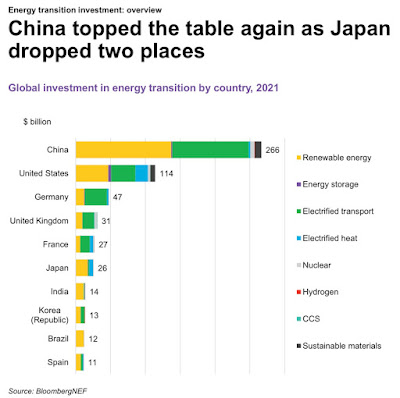 My colleague Christian Breyer summed it up succinctly in a message to John Curtis' office a couple months ago:

The fundamental message is very simple: Any leading economy in 2030 has an energy system largely based on renewables, or it will decline and not be anymore a leading economy in the 2030s and 2040s. The reason is trivial: least cost. No other energy supply option is lower in cost. Clean air and phasing out of CO2 plus many jobs we get on top.

In summary, things are moving in a really positive direction. However, there remains a lot of work to do. In our report, we recommend the following: